As marketers, we probably all have that one campaign that we can note as a favorite. Stunning campaigns are striking and evoke emotion: Joy, inspiration, liberation, excitement … the list goes on and on.

For me, when I think of incredible content marketing campaigns, I turn to fast food. Fast food marketers have a history of successfully building massive interest for new menu items or poking fun at competitors via social media. If enough people participate in the exchanges, a campaign can go viral.

Thus, the summer of the chicken sandwich, led by fast food chain Popeye’s, takes the cake for my favorite campaign. When Popeyes’ chicken sandwich appeared on menus, what ensued was a slew of positive tweets, which escalated into a phenomenon.

I love this campaign because the response came as a surprise — such a surprise, in fact, that less than two weeks later, the Popeye’s team had to officially declare they’d run out of chicken:

Y’all. We love that you love The Sandwich. Unfortunately we’re sold out (for now). pic.twitter.com/Askp7aH5Rr

… And then, the sandwich returned a mere month later in a 30-second announcement. An announcement that, in true fast-food wars fashion, took a moment to jab at competitor, Chick-fil-A:

Y’all…the sandwich is back Sunday, November 3rd. Then every day. 🤯🔥 pic.twitter.com/JDxyCIv0zz

Viral marketing campaigns show us how much power there is in marketing. But that’s just my favorite example. Let’s take a look at the favorites of HubSpot content marketers.

“One of my favorite recent content marketing campaigns is Pepsi Max’s Uncle Drew series. This absolutely ridiculous series of webisodes that ultimately led to a full-length feature film was hilarious, entertaining, memorable, and still highlighted Pepsi products despite having its own plot line. Although the movie’s reviews were subpar, this series and film were awarded with a 2019 Clio Award.”

“I think this is a fascinating example of how a brand marketed its product and ultimately created a character that could get audiences to buy movie tickets for what was essentially a two-hour Pepsi commercial.” – Pam Bump, Audience Growth Writer

For more information about Uncle Drew, check out this Clio winning campaigns post.

2. Nerdwallet’s “You Deserve the Best” campaigns

“I’m in love with how Nerdwallet does content. Nerdwallet’s goal is to become the destination resource for anything money related. Their entire site is a content engine, providing helpful and useful information upfront, like their ‘You Deserve the Best’ campaigns, that provide a roundup of helpful financial resources at the beginning of each year:

They don’t push their offerings, but they are visible and helpful should someone need to take their money game to the next level.” — Amanda Sellers, Historical Optimization Writer

“You know it’s a really good content marketing campaign when you send it to your mom with the message: I know it’s technically an ad, but you have to watch this. That’s how I felt about Activia’s ‘Don’t Tell Me I Can’t’ video campaign:

“Activia is a probiotic yogurt company, but the company’s ad has little to do with yogurt and everything to do with authenticity, vulnerability, and what it means to be your own harshest inner critic. I teared up out of a sheer sense of, ‘Oh my God, I think like that, too’ — what more could you want out of a marketing campaign?” — Caroline Forsey, Editor of HubSpot’s Marketing Blog

4. Nike “Show Them What Crazy Can Do”

“This campaign, narrated by Serena Williams, struck the right chord for me. As someone who has been a life-long athlete, the campaign makes me feel a variety of emotions. But no matter what you feel while watching their video, Nike’s motivational and encouraging message to female athletes is clear.” — Kristen Baker, Content Marketing Manager

“Every time Taylor Swift is about to drop an album, her fans know about it before the media even catches on. That’s because Taylor Swift’s marketing, while predictable, is extremely effective. For her recent album Lover, she began her marketing campaign by commissioning a mural in Tennessee. People began speculating, and she then transitioned her marketing to Instagram: 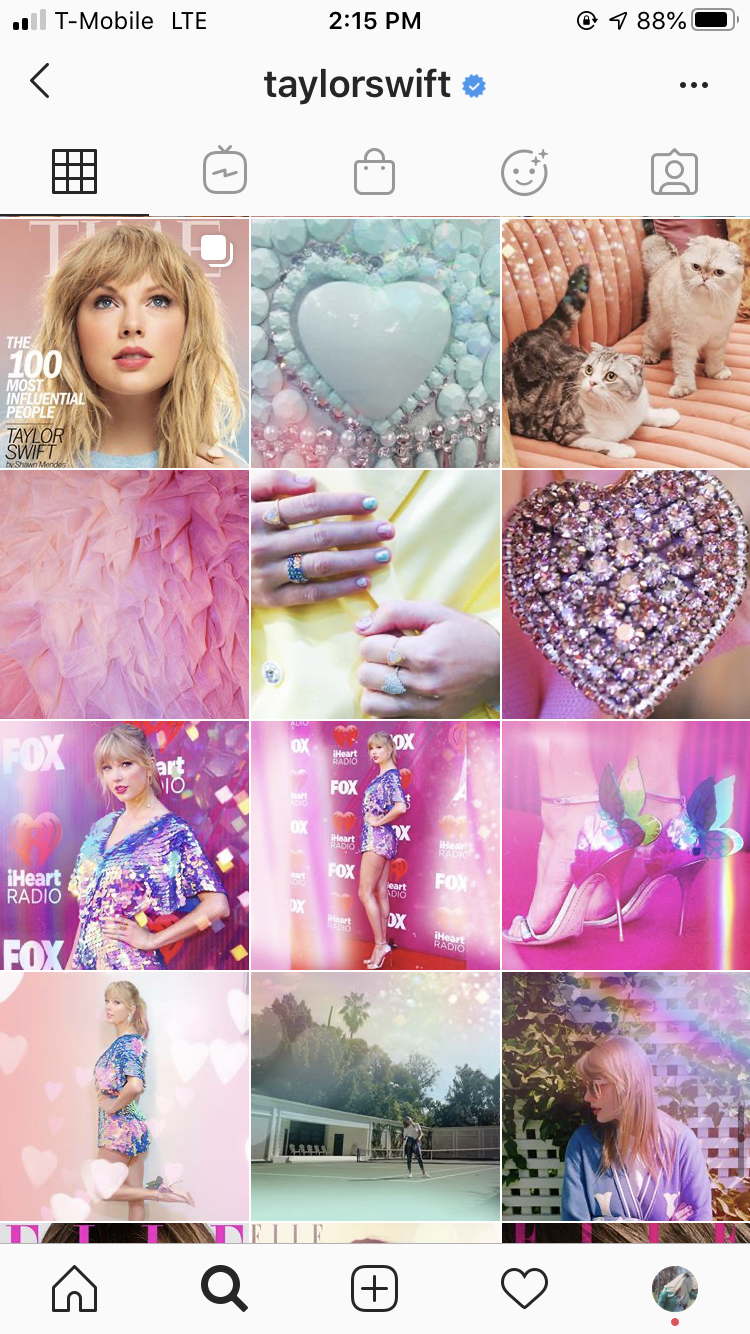 “Without announcing an album, Taylor Swift will begin changing the entire look of her Instagram. Her campaigns are effective because there’s a lot of hints and suspense that come with an announcement.” — Rebecca White, Jr. Staff Writer

“I enjoy anything that makes me laugh (which is admittedly easy). Squatty Potty created a humorous campaign that somehow schooled me on my physiology at the same time — and taught me about the product that I never knew I needed.”

“Their clever and lighthearted approach to an unmentionable topic resulted in a campaign that I’ll never be able to get out of my head. Not to mention, the campaign boosted sales by 600%.” — Christina Perricone, Content Marketing Manager

“I love Jeff Hoffman’s email marketing campaign supporting his company’s weekly webinars for sales professionals. The cadence of his emails is not overpowering (once/week), but what really grabs me are the subject lines/topics he and his team choose. They are SO relevant to his audience, straight to the point, and really clearly communicated. 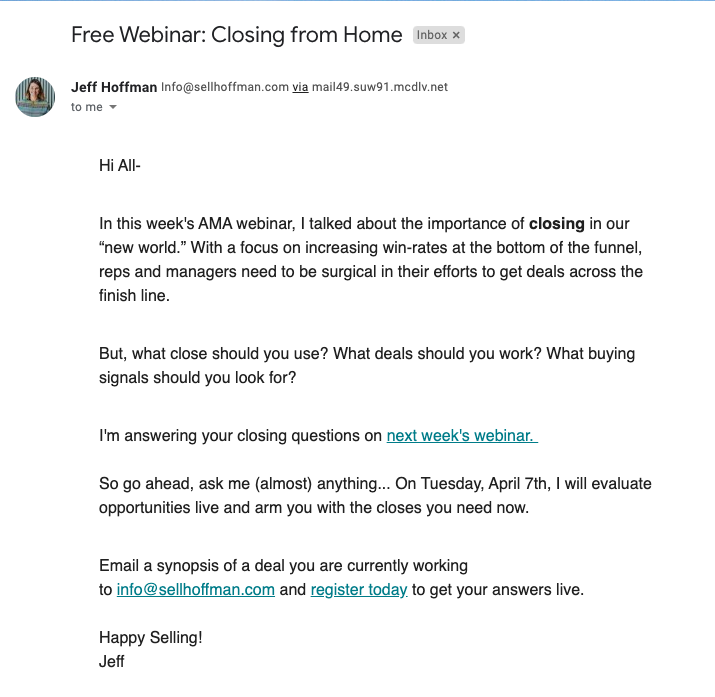 “I love a good flashy, multifaceted content marketing campaign as much as the next marketer, but there’s something so refreshing about clear communication, expertly chosen content, and a simple CTA. His emails are also written in a tone that is incredibly conversational — the reader can’t help but be drawn in. One of his recent emails was signed “Happy Selling (Hell, happy anything these days!)” and I loved how it was so in tune with how most sales professionals are feeling right now.” — Meg Prater, Managing Editor, HubSpot Blogs

News radio provider NPR has a lot of programs, but my favorite by far is their Tiny Desk Concert series, which has 3 million subscribers on YouTube alone. Tiny Desk hosts musicians, with audiences small or large, at NPR’s office or in their homes, and they put on an intimate concert:

The team behind NPR’s Tiny Desk series realizes that not every guest has the same level of celebrity as artists like Lizzo or Harry Styles. So, every year, they host a contest, where unsigned, independent musicians can submit a DIY Tiny Desk concert for the opportunity to win one of their own:

This commercial is an excellent promotional tool because it emphasizes the lives that independent musicians may lead. I love this campaign because it gives a spotlight to smaller artists that wouldn’t necessarily have the same kind of exposure to new audiences that NPR has.

The promo is great at being relatable and evoking a feeling that anyone has the possibility to create something memorable. Plus, the contest home page is an excellent resource — submitters can find past winners, their concerts, and can even check out competition under the “Watch Entries” tab.

“Tiny Desk Contest” campaigns make NPR more accessible to its audience of music lovers. It allows audiences to contribute to their favorite publication and build their own careers, and I love how relatable the marketing messages are.

These campaigns each have something marketers can learn from. Whether it’s to connect with the emotions of audiences — like laughter or excitement — or to develop a unique brand voice and apply it to every piece of content.

When you think of your favorite campaign, what stood out to you? For me, I always look for the response of the public. Like seen with the Popeye’s campaign, a successful campaign is always measured, in part, by audience reaction.

Popeye’s got to enjoy an explosion of word-of-mouth-marketing and good timing. What are some of the tactics your favorite campaign used?