How 5 Brands Use WhatsApp For Marketing

In 2019, WhatsApp reached 2 billion global users and solidified itself as the most popular mobile messaging app worldwide.

When the app launched in 2009, it was just a basic SMS platform that allowed you to log on, text message friends, send photos or videos, and make voice calls globally using Wi-Fi. The app became popular as an alternative to paying costly phone bills to communicate with loved ones around the world.

As one of WhatsApp’s earlier adopters, I discovered the app when studying abroad in Ireland.

After blowing up my U.S. cell phone bill with roaming fees and spending countless euros just to text my roommate on pay-as-you-go Irish phone, my classmates told me to download WhatsApp. Almost instantly, I was able to call my parents and connect with friends in the U.S. and Ireland. I never needed to use my junky temporary phone again.

After using WhatsApp for a few months, it was pretty apparent that this simple Wi-Fi fueled tool was going to be a big innovation in the telecommunication industry.

A few years after my trip abroad, WhatsApp became even more well known when it was acquired by Facebook in 2014. Since then, WhatsApp’s evolved from an SMS tool to a full platform of features. It’s also gained major attention from brands.

Most recently, in 2018, the app innovated even further by adding a group chat option and group video calls. With these features, companies like British Vogue could build group chats filled with prospects and send content or offers to them. Meanwhile, other brands have leveraged WhatsAp as a channel where customers or prospects can contact them with questions about a product.

Aside from WhatsApp’s large user base and brand-friendly features, the app’s also become intriguing to companies because of how it’s pulled in users from all around the world. While the app was created in the United States and is popular throughout North America, the two countries with the most users are actually India and Brazil.

Because of its global audience, brands that are looking to market internationally are able to leverage WhatsApp, as well as global social networks, and paid advertising campaigns.

But, despite WhatsApp’s global opportunities, the platform still presents a few challenges for brands.Early Challenges of WhatsApp

Prior to 2019, WhatsApp’s format was designed to keep people’s contact information private so that random accounts can’t easily find and message them. It was not initially designed for business usage. Because of this, neither you or your brand could create public accounts that users can easily search for.

Because WhatsApp required you to know someone’s contact information, brands similarly couldn’t use the network to find, add, and contact prospects that might have been interested in their product. Alternatively, the companies would need to get WhatsApp information directly from the prospect or a contact list they already had or add them.

But, things are changing for brands on WhatsApp.

Recently, WhatsApp and Facebook announced the launch of WhatsApp for Business, an app that allows companies to create an account with company information, allow contacts to text or call them, and monitor app-related insights. 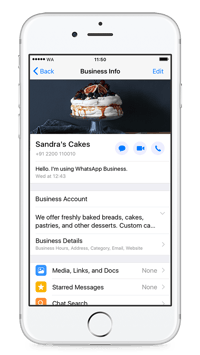 WhatsApp for Business, which has gained over 5 million users since its 2019 launch, also enables companies to build and share product catalogs, which highlight current offerings and can link to ecommerce sites. Once a business creates a catalog, its marketing team can share its link on the brand’s profile or in chats with prospects. Here’s a quick demo of how the catalog tool works:

Additionally, even though connecting with broad international targets was challenging at first on WhatsApp, some companies say the smaller groups they’ve interacted with on were more engaged than larger social audiences. This could be because a person who gives a company their contact information or is willing to add a company’s contact to might be incredibly interested in learning about that brand from the start.

Aside from WhatsApp’s engagement and branding opportunities, Facebook’s ownership of the platform also benefits advertisers. Recent findings reveal that branded ad targeting has resulted in more ROI due to data sharing between WhatsApp and Facebook.

Although Facebook plans to integrate WhatsApp and Instagram into its own flagship platform, CEO Mark Zuckerberg says WhatsApp will remain a standalone app that benefits from Facebook’s app ecosystem.

Because WhatsApp is a growing app that probably won’t get discontinued any time soon, businesses of all sizes are continuing to experiment with it. Top Industries on WhatsApp

Most recently, two specific industries that are flocking to WhatsApp are publishing and fashion. Meanwhile, food and beverage companies like Absolut Vodka also leverage the platform for marketing.

If you’re similarly aiming to target global audiences, a WhatsApp strategy could be worth considering now or in the future. But, if you’re new to the platform, you might need some inspiration to learn more about what makes a mobile messaging app’s strategy successful.

To help you plan your first experiment, here are a few of the best WhatsApp tactics that marketers can learn from.

How 5 Brands Are Using WhatsApp

Adidas has been using WhatsApp since 2015 to answer questions about their products and promote new items to prospects. But recently, they launched a campaign that combined live chats and influencer marketing.

In 2019, after realizing that athletic teams used WhatsApp to send team-wide communications or announcements, Adidas offered to help recreational sports players “rent” a professional athlete — or “predator” — for one of their upcoming games.

Days later, Adidas sent a direct message to the winning recreational athlete. The “pred” then showed up to the recreational game dressed in Adidas sportswear.

“WhatsApp was perfect for the more functional elements of the ‘Rent-a-Pred’ hotline as it allowed consumers to share private information one-to-one with us for review, before being allocated a Predator player near them,” Coveney explained.

In late 2019, the Financial Times, a subscriber-only publication, posted two free daily articles in its WhatsApp Group. According to Digiday, the tactic of sharing content has given them more conversions than other social platforms, more brand awareness, and insight into what topics are important to their potential subscribers.

Interestingly, the publication discovered that although its audience was much smaller, it was more engaged with the content and more likely to subscribe than audiences on other online platforms.

For example, people who clicked a Financial Times link on WhatsApp were 40% more likely to return to the site within three days than those who clicked their links on other channels. The publication also found that traffic gained from WhatsApp was similar to what it received from its average Twitter post.

“People liked the convenience of having [news] come through to their phone, pushed to them where they are, without having to go to our site, on a service they are already signed up to,” said the Times’ Audience Engagement Editor, Alana Coates, in an interview.

One of WhatsApp’s earliest success stories came from the Swedish liquor company Absolut Vodka. When marketing the launch of its Absolut Unique vodka product in 2013, Absolut struggled with driving global audiences and was tightly competing with other liquor companies that had many more years of history supporting them.

Unlike many other alcoholic beverage companies, Absolut didn’t have a story of long-running success behind its brand just yet. While some liquor companies could easily market how they’d been using the same recipes for hundreds of years, Absolut was only established in 1979.

Nostalgic content, such as this ad from Jim Beam, allows older brands to tell a story about their successful history, while emotionally connecting with their audiences. This was something that a young company, like Absolut, couldn’t play up as a marketing tactic.

Instead of inventing a story that spoke to audiences of all ages, Absolut decided to leverage WhatsApp’s messaging system to earn credibility and awareness from younger audiences globally.

To mark the Argentinian launch of Absolut Unique, the beverage company promoted a contest where you could win two tickets to a celebration of the new product in Argentina. To enter the tickets, you had to go on WhatsApp and message the account of a doorman named Sven to convince him why you deserved to attend the party.

According to a case study, 600 Argentinian users contacted Sven over the course of three days. The campaign was also widely discussed locally which helped Absolut gain brand awareness even from people who didn’t contact the account.

Although Absolut is now a giant, well-known company, this is a great example of how the brand recognized and leveraged WhatsApp as a platform that could be used to boost local brand awareness and sales in another part of the world.

Back in 2014, Hellmann’s, a U.S.-based Mayonnaise company, wanted to reach audiences in Brazil, Argentina, Chile, Uruguay, and Paraguay. To do this, they hired a team of professional chefs to help them with a WhatsApp campaign.

According to Cubo, an agency that assisted with this campaign, 13,000 people signed up for the service and the average participant interacted with a chef for 65 minutes.

With the “WhatsCook” campaign, Hellmann’s leveraged industry experts as a way to get in contact with fans. The company already knew that people who bought its mayo wanted to use it. But, they also knew that people might not know many mayonnaise-friendly recipes. With this strategy, the brand engaged with people who love to cook and solved for the customer by showing them how to use Hellmann’s main product in different ways.

During Yoox’s WhatsApp experiment, they made $80,000 off of sales through the app.

This is a great example of how a company leveraged WhatsApp to reach interested prospects, ease them through the buyer’s journey with a highly interactive messaging experience, and successfully make sales without having customers enter a store.

As seen above, WhatsApp can help brands to nurture interesting prospects into leads. At the moment, you can’t send a message to the entire social platform, but you can send links and engage with contacts that have already shown interest in your brand.

While all of the examples are fairly different, they all emphasize how interactive and highly personalized mobile messaging techniques can be beneficial to marketing.

If you’re planning to test out a WhatsApp experience, keep these tactics in mind:

Interested in learning more about messaging app strategies? Check out this blog post that compares WhatsApp, Snapchat, and Kik.