When you begin implementing a social media strategy for your business, one of the first questions you’ll ask yourself is this one — Should my business be on Twitter, Facebook, or Instagram?

Those three social media sites offer considerable opportunities to connect and engage with a network, increase brand awareness, and drive traffic to your site. But they’re also incredibly different in terms of purpose.

Ultimately, Facebook’s purpose is to connect people with their friends and family. People use Facebook to share photos, videos, and general updates on their lives.

Twitter, on the other hand, is used to share ideas, real-time information, and trending news. While people may also use Twitter to connect with friends and family, they largely use it for a bigger purpose — to connect to the wider world as a whole, and hear what’s happening (in 140 characters or less).

And then, Instagram is used to share photos and videos. People mainly use this app to post their “highlight reel” and follow influencers. This is where people become a part of a social media community.

Of course, this still begs the question — where does your business fit into all this? To explore the pros and cons of Twitter, Facebook, and Instagram, we’ve created a comprehensive breakdown of the three platforms.

Keep reading to figure out which platform is a better business investment for your company.

To start, let’s consider the potential demographic your business could reach on each platform.

Twitter typically appeals to a younger demographic — 40% of Twitter users are between the ages of 18-29, while less than 20% of people ages 50 and up use the platform.

While Facebook also appeals to the 18-29 age group (attracting over 80%), it proves more popular for an older demographic, as well. 65% of people ages 50 and up use Facebook.

It’s equally critical you determine quality over quantity — how long does each site’s audience stay on the platform? Or, alternatively, how many minutes per day do they spend on each?

Here’s a quick breakdown — roughly 46% of Twitter users are on the platform daily, and 81% of millennials check Twitter at least once per day.

Additionally, Twitter accounts for 16% of referrals to longer articles from social sites and 14% for shorter news articles.

With all this in mind, you might ask yourself — does your business have content that aligns well with Twitter’s fast-paced community? If you have quick, easily digestible business tips or news articles you’re eager to share with your audience, Twitter might be a better bet.

However, it’s important to note, Twitter is meant for quick, compelling 140-character statements that can quickly get buried under new Tweets. To build brand awareness, Twitter might be a good platform. However, its fast-paced nature might make it difficult for you to gain traction on a post for long.

With this in mind, no matter how many followers you have, if you can appeal to your audience with the right content, you’ll likely have better engagement rates than on Twitter and Facebook. 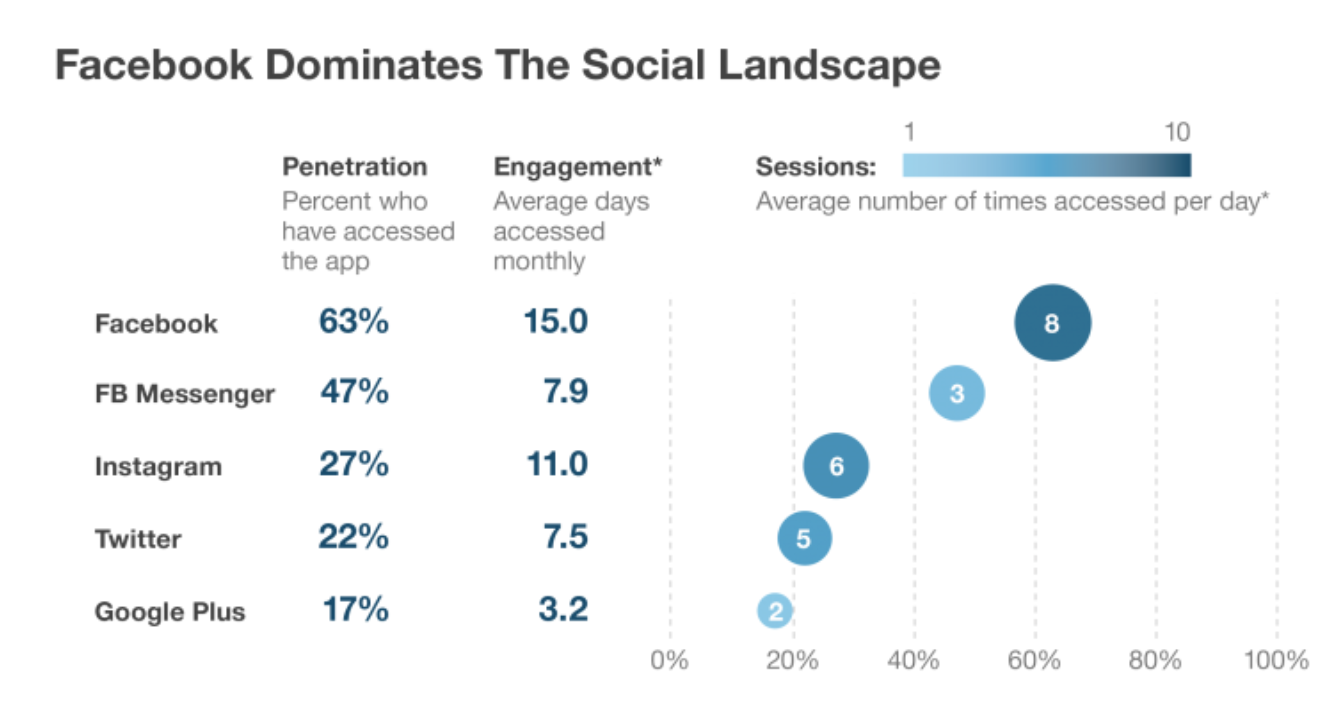 With less than 140 characters to convey your brand’s message, you might think of Twitter as your business’ “elevator pitch”. What do you want to get across to your audience quickly and succinctly?

While this might feel stressful, think of it this way — today, many of your consumers are oversaturated with content, and easily distracted. This attention-deficit lends itself well to Twitter’s platform, where you’re able to quickly engage with your consumers with less risk of losing their attention halfway through.

Alternatively, Facebook is your opportunity to engage more in-depth with an audience. You can create full business pages, share videos and images, and further incentivize prospects to engage with your brand by offering 10% off if they “like” your business page, for instance.

Then, with Instagram, you can truly create an interactive community. This is the platform where users are more likely to engage. People go to Instagram and expect to see influencers and follow brands they like.

When you consider their vastly different purposes, then, it makes sense to try both. Twitter can be seen as your initial handshake, while Facebook is that first full-length conversation.

Facebook advertising’s interface is relatively easy and intuitive for the user. Facebook ads can be relatively cheap, as well — in fact, Facebook boasts “Some people spend more on coffee each day than they do on their ad campaigns”. While it depends on the campaign you’re running, you can often set a budget as little as $2 to $3 per day.

It may be worth the extra money, though — according to AdWeek, engagement rates for Twitter ads can be as high as 1-3%, much higher than Facebook’s average CTR of 0.119%.

Ultimately, it’s likely best to try Twitter, Facebook, and Instagram for a while if you’re unsure which one works better for your brand. Over time, you’ll gain valuable insights into how well your posts perform on these sites, enabling you to dedicate more time to one over the other. Since they’re free to use, there’s no harm in initially trying all three.

Once you see true, valuable engagement on one, you might then consider implementing an advertising strategy to turn that traffic into conversions.

Alternatively, try researching which platform most of your competitors use. If you work for a PR agency and most PR professionals use Twitter to promote their clients, it’s critical you also appear on the tool. On the other hand, if you work for a retail store and you find Facebook is often used for promoting retail products, it’s probably best to put effort behind Facebook.

Editor’s note: This post was originally published in February 2019 and has been updated for comprehensiveness.